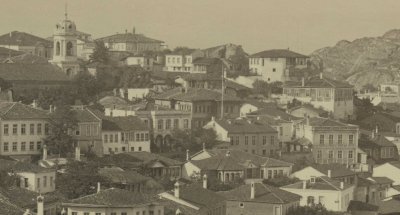 photo of Plovdiv - 1893 We can find first information about the house in the remarkable Renaissance book of the writer Konstantin Moravenov - “A monument of the Christian population of Plovdiv”, written in the distant 1869, first published in 1984. In it, the author describes the house as situated on the northern slope of Taksim Tepe, the western branch of the three-hill Plovdiv, located in close proximity to the cathedral temple "St. Bogoroditsa”.

As the first known owner, the author of the book describes "an old grandmother called Sabakhtanka", the wife of Georgi Sabakhtan, who moved to Plovdiv around 1810. Over the years, the house has changed many owners, such as Chalakovi, Hajiandonoglu, Kendidoglu and others.

In another book, “The Monument”, Konstantin Moravenov describes the house as a large house with many rooms, wonderful carvings and a place for wonderful social gatherings.
In 1933, Eleni Kendidoglu sold the house to rich tobacco merchant - Nishan Kalfayan. A year later, in 1934, the house underwent major renovation, an external extension appeared - a laundry room, as well as, it has been upgraded. For many years, Kalfayan's family lived in the house until the end of World War II.
After the communist regime came to Bulgaria in 1944, the house was forcibly taken away from the owners for the benefit of the state. During the years of communist regime, the house was used for filming industry, as well as, for the representative needs of the ruling party.
In 1992, the landmark house was returned to the owners of the property, Nishan Kalfayan's heirs.
In the years since, the house has become uninhabited, unsupported, and as a result it collapsed in 1997.
Twenty years later in 2017, the property was acquired by the current owners. It has been declared as a cultural monument of local importance and has been completely restored in its archival documentation. The house in its present form was completed in 2019 and as of 1st July begins to receive its guests. 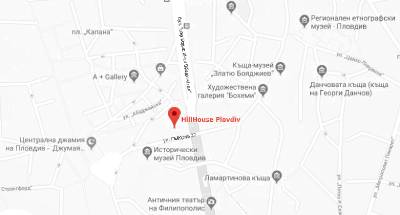 Guest House HillHouse is located in the absolute center of Plovdiv, the second largest city in Bulgaria, the oldest living city in Europe with a thousand-year history (nearly 6000 years). A city with an extremely rich cultural and historical heritage, the cultural capital of Bulgaria.

Guest House HillHouse is situated at the beginning of the Old Plovdiv Architectural and Historical Reserve (also known as the Old Town) on 27 Saborna Street.
The house is in close proximity to the landmarks of the city of Plovdiv, meters away from the main street, a quiet and quiet street with limited traffic.

Nearby there are numerous restaurants, shops, places for entertaining and walking, etc.
We use cookies to personalize content and ads, provide social media features, and analyze traffic. We also share information about using our site with our social media, advertising, and analytics partners. Read more...